Homepage About us News Tatra being first on the Rally Tunisia.

Tatra being first on the Rally Tunisia. 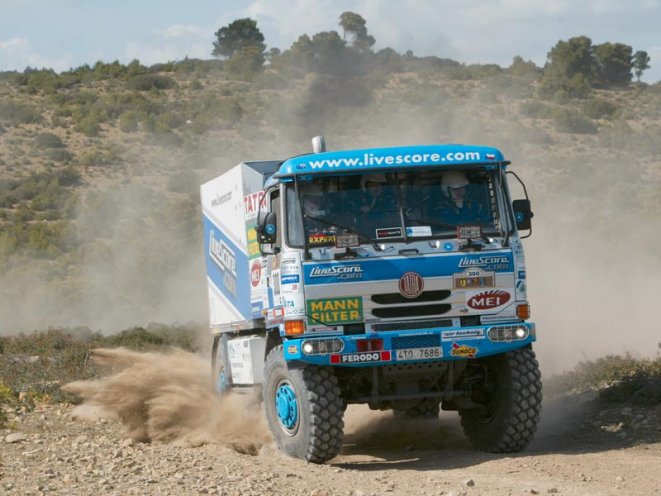 The Racing Team headed by Tomáš Tomeček has won its first place in a hard competition in the 26th edition of the Rally Tunisia Optic 2000 on the Tatra 815 truck. This success has been enabled by the top quality and trouble-free RUBENA products fitted on this Tatra truck – pneumatic springing, silicon-textile clutches and hoses and a whole line of parts of technical rubber. The RUBENA lifting bags have always helped when breaking down the truck in sand dunes.

After having cancelled the January Dakar race, there was question of a longest competition on the African continent in this year, where the overall length of 40 120 km has been  interspaced, in sections of 2 881 km, with special and speed tests. This competition has been  attended for the first time in its history by the representatives of the Czech Republic, namely in the „Superproduction“ truck category, where the Tatra 815 4x4 car has started with the crew consisting of Tomáš Tomeček (pilot), Vojtěch Morávek (navigator) and Radomír Smolka (mechanician).
Tatra, in silver-blue colours of the Australian company Livescore.com, has set out  for this  Tunisian competition without any accompaniment, which has meant, among others,  several tens of kilograms of an extra load, including four spare tyres, a set of  shock absorbers, tools and other important spare parts. Tomáš Tomeček has explained the reason, why he has chosen exactly this competition : „Our Tatra car is designed for  riding in sandy and stony zones of Africa, in addition to this, we have adapted it, after the January Dakar race cancelled, into the  „Superproduction“ version and we have looked for an opportunity to thoroughly test it. That is why I have preferred the Rally Tunisia to the Hungarian competition, where I have been attracted above all by new spaces in Libya.“